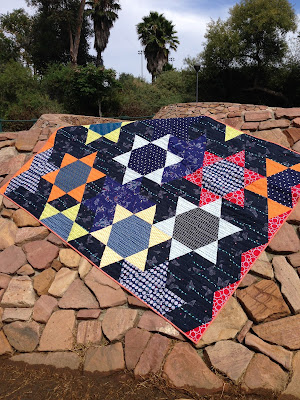 I have finally finished a star quilt for my son Jim’s twin bed.  I initially blogged about it here.  He’s very excited about it, but not enough to sleep under it.  He still prefers his nest in our bedroom.  It does up the cuteness factor in his room though.  Before this was finished he had a small quilt that I made for one of my daughters.  It was one of the girliest things I had ever made and didn’t cover the bed, so this is definitely an improvement. 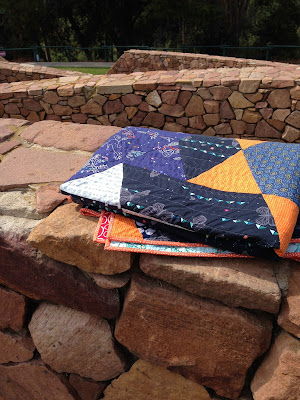 I’d like to make another quilt for this bedroom in preparation for my son Miles to move in eventually.  I was thinking about a plus quilt.  I could use similar colors and the geometric shapes would complement each other without being to matchy.  I’ve seen two lately that I’ve liked, one at Kitchen Table Quilting and the other at Maidenhair Fern. 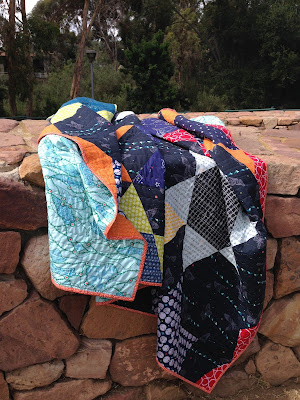 This was the biggest quilt I’ve ever machine quilted, so that was a challenge for me.  I think I should have done the wavy quilting throughout the whole quilt, but I wasn’t patient enough.  I love the orange binding and I feel like the bright back helps lighten up the front a little bit.

Linking up with Crazy Mom Quilts for Finish It Up Friday. 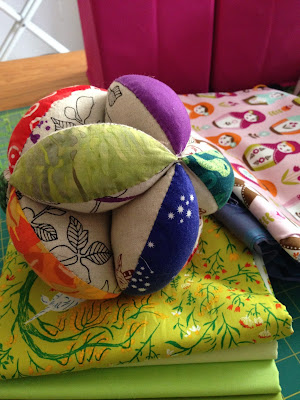 I’m working on three puzzle balls for my sister’s sister-in-law.  She has three little girls who like pink, purple and green, so she needs one of each.  I’ve got the pink one started... 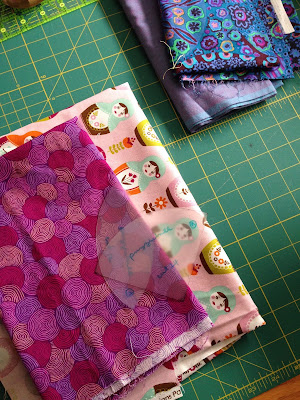 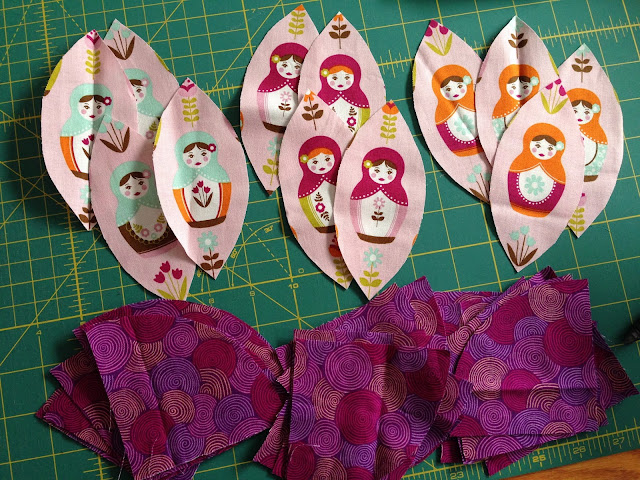 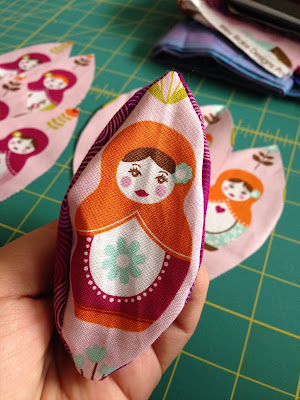 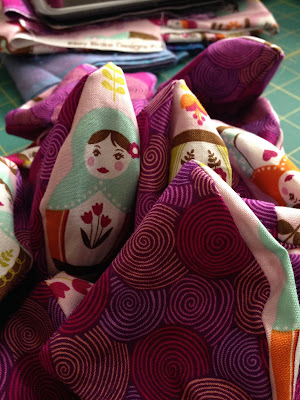 I've got the fabric picked for the purple... 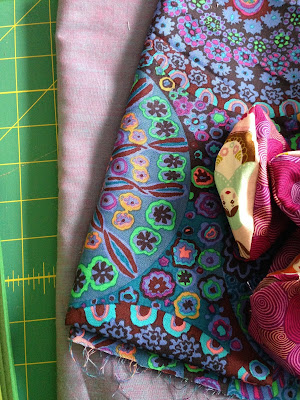 And I have an idea about the green... 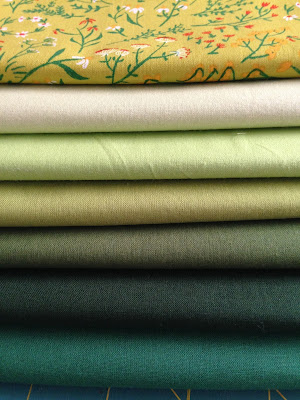 The green has been the most difficult by far.  I’m not sure why- I’m a big fan of the color, but it has been a challenge.  I was thinking about making the side pieces out of the solid green fabrics and putting something fun on the top.  Not sure about what exactly to put up there, so if anyone has a suggestion for a fun green, I'd love to hear it.  My current thought is the unicorn fabric from Far Far Away by Heather Ross.

Linking up with WIP Wednesday at freshlypieced.com.
Posted by peekamoose mountain quilts at 5:11 PM 3 comments: 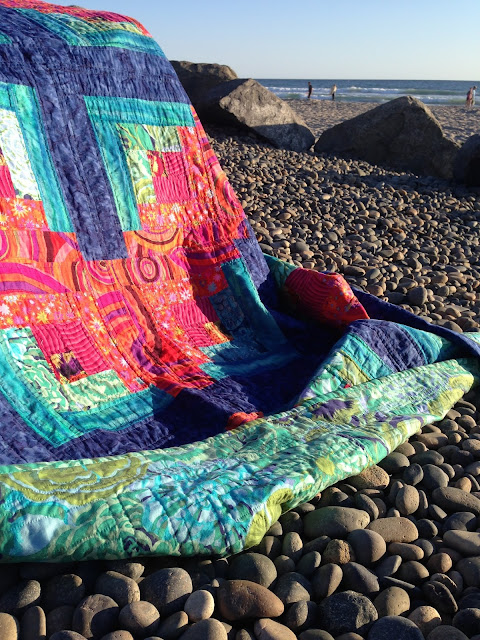 I made this log cabin for my daughter, Paolina.  Right now she is away with her grandma in Alaska, but the rest of us took the quilt with us to enjoy sundown over the Pacific and to see if we could get some pictures of the quilt.  I have been working on this for years now.  It took just a few evenings to piece it about six years ago and I’ve been slowly quilting it ever since.  I can’t say that I’ve been diligently working away, but I do think that it has taken a couple hundred hours to quilt.  Over the last several years I have had several bursts of activity on it, especially when my sons were born and I had a bit of recovery time on the couch or in bed.  After my youngest son was born I was able to finish everything but the border, and then, over the past few months I got quite sick and had the time to finish the border and bind the quilt while I recovered. 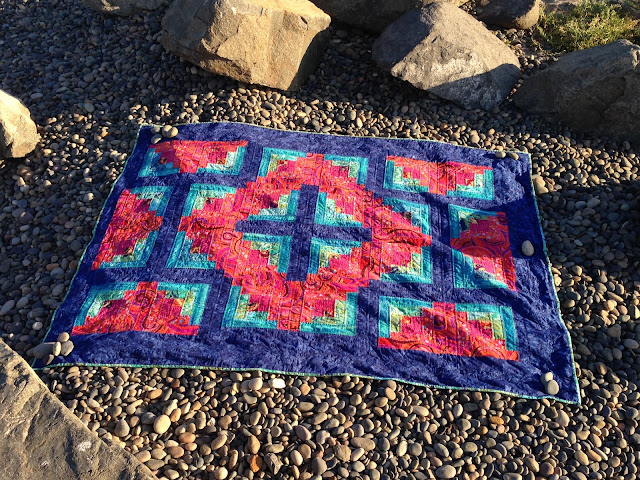 I began to make the quilt on a whim so I just picked bright colors from what I had on hand.  I didn’t have enough of some of them, so I just substituted something similar.  I think if I were to do it again, I would adjust the layout and not make it so symmetrical. 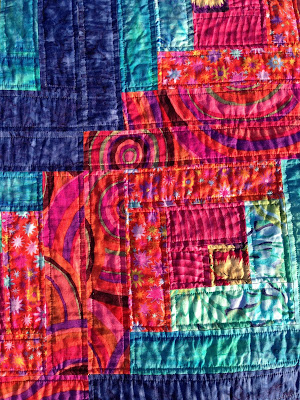 Once I started quilting it I was afraid that it wouldn’t be a quilt that would grow with Paolina colorwise.  I also wasn’t sure that I liked it, but when I had it flat to trim it for binding, I saw the whole thing in the light and realized that I really do like it.  It’s youthful and vibrant and has tons of energy, but also sweet -- just like Paolina.  I also like how pure and rich the color is, very saturated, not clouded with grey or white.  I quilted around the pieces of each section of the log cabin blocks using a light green quilting thread.  I used a between and a small stitch, the smallest I could manage.  It is an old fashioned look and it takes MUCH longer to execute, but I'm really a fan of this style.  For the border on the top of the quilt I quilted a twisted rope pattern and at the center of the bottom border I quilted her initials.  For the sides and the rest of the bottom I quilted little birds. 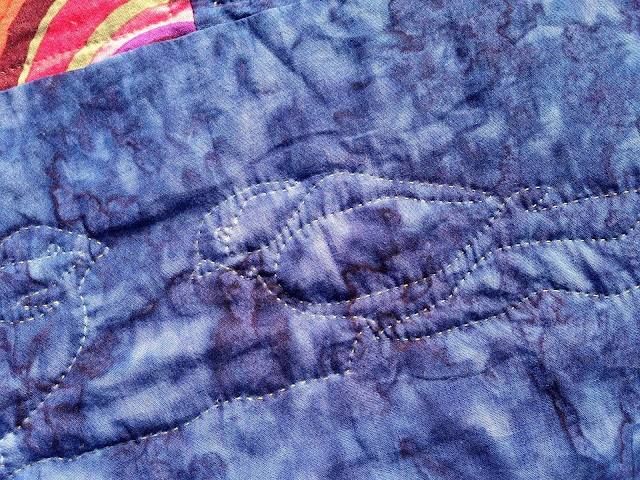 For the birds we were inspired by an Emily Dickenson poem called, “Hope is the Thing with Feathers”.  I had initially thought that it would be a good poem for Lucia’s quilt, but she prefered another poem about roses and since she picked some fabric with roses on it we went in that direction for her.  Paolina was attached to the Emily Dickenson poem, and I love it too.  On the back I intend to make a label that includes the poem.  That’s the only thing that hasn’t been done yet. 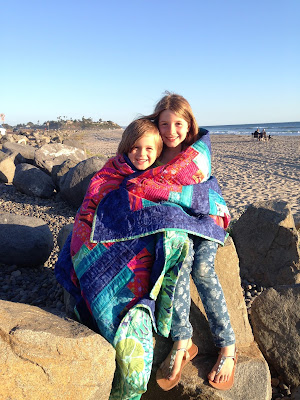 I'm linking up with Finish It Up Friday at crazymomquilts.
Posted by peekamoose mountain quilts at 11:35 AM 3 comments: 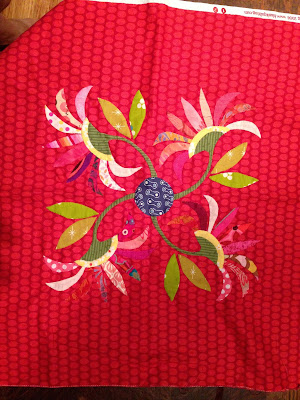 A few years ago I took a hand appliqué class.  The teacher of the class brought in a sample of her work, a beautiful quilt made from a pattern called Aunt Millie’s Garden.  The sample on the pattern is made on a red background, which is beautiful, but my instructor had made her's on an orange background.  It was lovely, and it made me want to make my own. 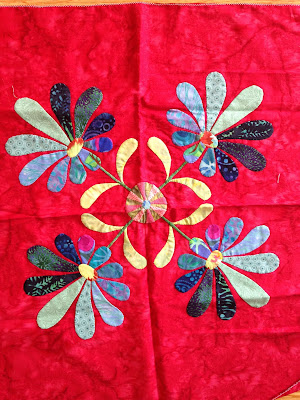 At the time she was clear that this was not a beginner project, but I really didn’t listen.  I bought the pattern and started working through the blocks.  I don’t think I’d win any ribbons for my appliqué, but I’m very happy with my progress.  It is a great long term project.  I can put it down and pick it up months later without any trouble.  It’s also very portable.  I have the project split between a couple of large ziplock bags, and I can take it anywhere. 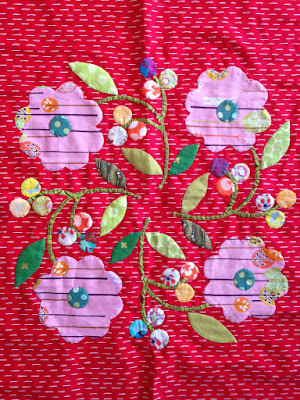 Recently I’ve finished some big projects and need something to do while I get my machine cleaned.  I have been able to dive right back into this and I even feel like I may finish it in the next couple of years.  (I want to be realistic, it will take time to hand appliqué and then hand quilt this quilt.)  I have nearly finished 5 blocks out of the 12 to be done.  I still have to finish the center circles on all but one of the blocks. 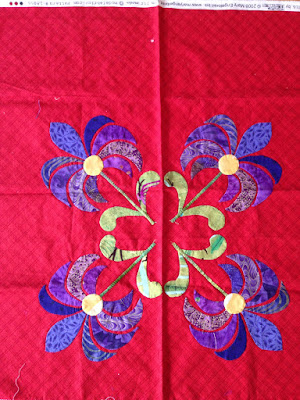 I have plans for this quilt.  I have never made a quilt for my own bed, and I think this might be the one.  I have tried to use scraps for the appliqué as much as possible, which is great for reducing waste, but it is also fun to see scraps from past projects.  It brings to mind people I love and projects I have loved making.  It will be fun to sleep under a quilt that brings to mind so many happy memories. 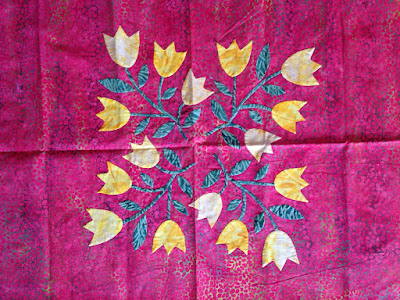